Home » Blogs » kitt's blog
Jonathan Grumble Buns« an older post
a newer one »The Men's Backpack or the Women's Backpack?
Blog Yeah, kitt finished writing this at 20:36 on 5 November 2021

Today was an elevation-gain training day. I'd been struggling to find much land texture in Phoenix, opting to go up and down shorter hills multiple times for elevation gain, with last week being particularly difficult. The hill I used ended up being 70m per lap, or all of 229' per lap. Those laps were not fun, I did not complete 13 of those laps.

This week, however, I have Mission Peak!

Not only do I have Mission Peak, I have the knowledge of Mission Peak, I have a higher aerobic threshold, and I have Luna! And Andy, Tilly, and Archie! Which is to say, my usual "let me do one more thing before I leave" does not work when someone else is going to walk with you on the mountain. I struggled, again, to stop working and take care of myself, to leave the house at the agreed upon time to meet Andy at Mission Peak, to hustle from the car, and just all around to hike today. This was not a fun hike. 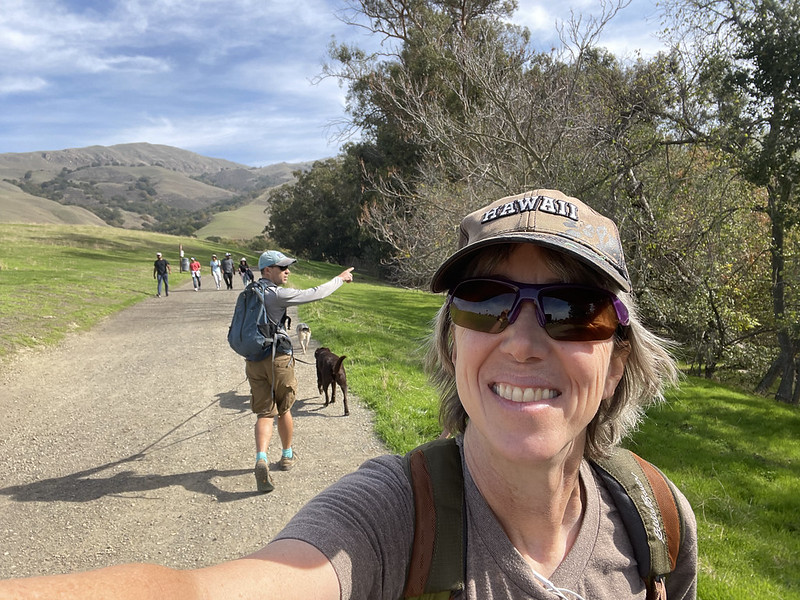 I arrived, unsurprisingly, late. Andy had waited for me at the trail entrance, which was amazingly delightful. When we started, he expressed concerns that I would be going slowly to keep my heart rate down. No no no, I told him, I was good to go. I told him about my last aerobic threshold test, where I didn't try to keep my heart rate low. I didn't sandbag this time: I did the test correctly, at a pace that I thought I could sustain for hours. I was confident I could sustain the heart rate because I had actually done exactly that couple weeks ago on the High Sierras hike with Zeb and Priyanka. Yep, no worries, I can move more quickly than before.

Except I didn't account for poor diet, a hard workout two days before, and lack of sleep two nights before.

I am supposed to keep my heart rate under 140.

Andy and I walked together for about an hour, and I really enjoyed the walk with him and the dogs. Tilly was excited for cattle, which Andy was very careful not to allow her to find. Luna was Luna, a graceful blur of speed zipping along the hills. Archie was his dopey self, chasing the balls that Andy threw for him. Arch didn't quite catch on that the balls were prototype balls of dirt, which disintegrated on impact. He appeared to be confused as he just kept losing them. Poor Arch.

When we arrived at the Horse Heaven Trail split, Andy listened to me rant a bit about the stunningly poor managerial skills displayed in a team meeting earlier in the day, then took the pups went back down the hill. I continued on up the hill for ten minutes before taking my first break and having a snack. Right, I hadn't had lunch yet.

Left turn up the hill, and I decided that I was going to come back down this way today. Usually, I loop around to the far side and descend on the longer but gentler slope. Today, I wanted to go down the shorter (by all of one kilometer, not much), steeper slope. I have no idea why, that was the way I wanted to go. 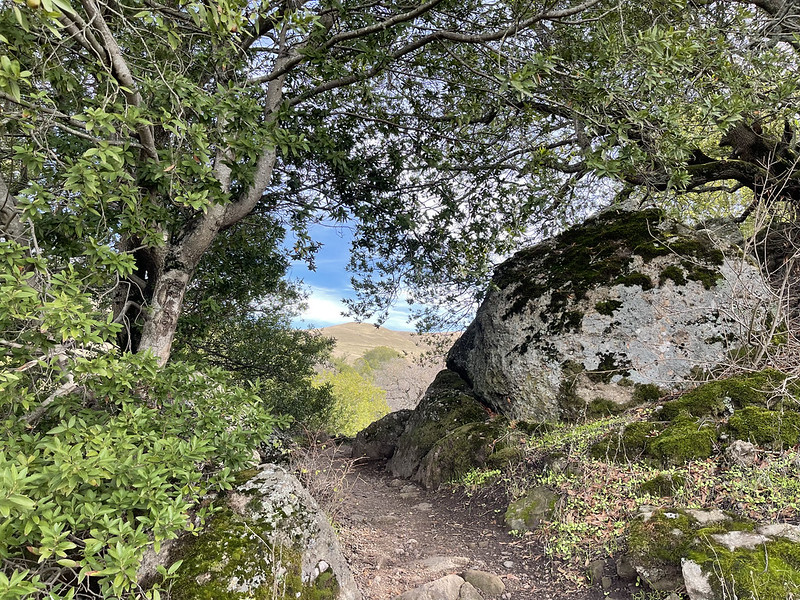 Up the hill, and I was struggling. I was mentally unfocused. My heart rate was high. My legs ached. My shoulders hurt. Yeah, I was carrying a twenty pound backpack all on my shoulders. Yeah, I was using my poles, and using them inefficiently. I kept going. I stopped. I started again, and kept going up the hill. As I'm went up the hill, I kept picking the hardest part of the trail. Was that side steeper? Okay, up that side. Was that part less even? Okay, over to that part. Was the ground going so slip out from under me here? Sure it would, gave it a go. I have no idea why I kept choosing these crappy parts of the trail, other than maybe because I kept hearing Nate's advice to train on the hard stuff so that the actual climb is old hat. "I need to make this clear: it doesn't get easier, you just tolerate it better."

Approaching Agua Caliente Creek, I couldn't stand the ruminations in my head any longer. I gave Jonathan a call, and we chatted for a short bit about whiskey sours and lemon drops and such, until I walked into a valley and the signal dropped. I thought maybe I'd stop ruminating. I didn't. Instead, I ruminated and used the rage of the meeting to fuel me up to the peak, dodging cows, missing giant ruts, and being surprisingly cold on the way. The wind picked up as it always does on the ridge, but this time was actually cold. I had kept my long-sleeve out of my pack when I started the hike, and paused to put it on. The temperature without the wind-chill was around 13˚, unsure what it was with the wind-chill.

At the top of the peak, oh, look, people were taking pictures of the pipes. QS. I didn't pause for more than a couple pictures before heading down the far side to loop around Eagle Trail and back up again. The great part of Eagle Trail is the toilet at the Eagle Spring Backpack Camp. Being able to use a toilet during the middle of a hike was and is great! Usually, I'm picking up trash on these hikes, and not having to pick up other people's toilet paper is wonderful. And, of course, I used the toilet. Both loops. 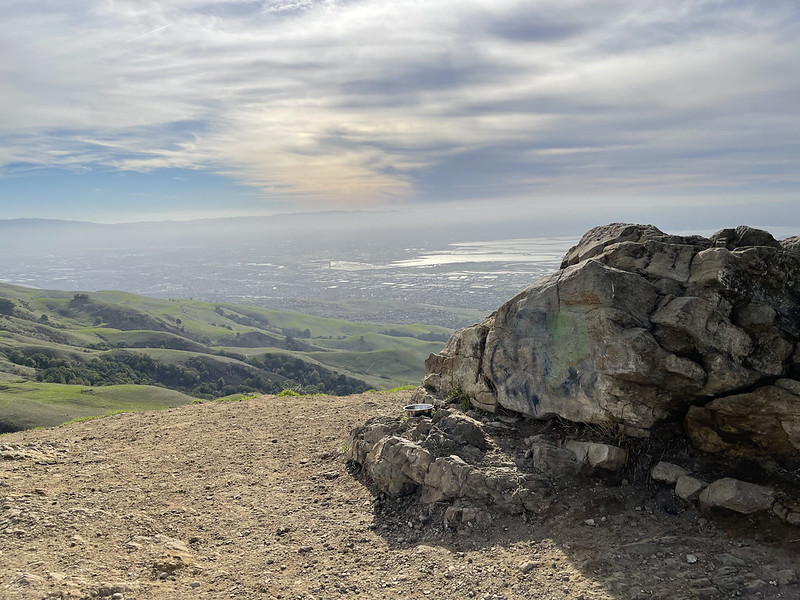 On the way back around to the peak, a loop I expected to take me 30 minutes to complete, then I expected it to take me 45 minutes, but which ended up taking me an hour, I realized I didn't want to hike two loops. I didn't want to be hiking this single loop. I wanted to head down the mountain and be done. I hiked to the ridge, turned right, and continued up to the peak.

The second time down the far side, my knees were aching. I was cold. Again, I considered going left instead of right, and just continuing down the mountain.

I turned right, back onto the backside of the mountain on Eagle Trail. I was ruminating again, and this time, I couldn't figure out how to stop. I called Jonathan again. We talked about his upcoming dinner with the guys until the signal dropped, and I started cursing up a storm. Apparently the signal hadn't actually cut out, and he ended up hearing me alphabet curse for a good bit before I realized he was laughing and I could hear him laughing. Of course, the signal cut out soon after that, and I continued hiking along the backside of Mission Peak.

As the sun started lowering in the sky, the winds picked up, and the cows started grazing in earnest. I walked off trail a large number of times in order to avoid the cows as, despite my overwhelming desire to go down the mountain, I turned right again and went back up the mountain to the peak for the third time. That third summit was my my 3000' of elevation gain today, which was actually 3188' of elevation gain for the day. The loops had taken me just over four hours, about thirty minutes longer than normal. Back around Eagle Trail, up and over the ridge, and down Horse Heaven Trail I went.

I have had better ideas than this one. 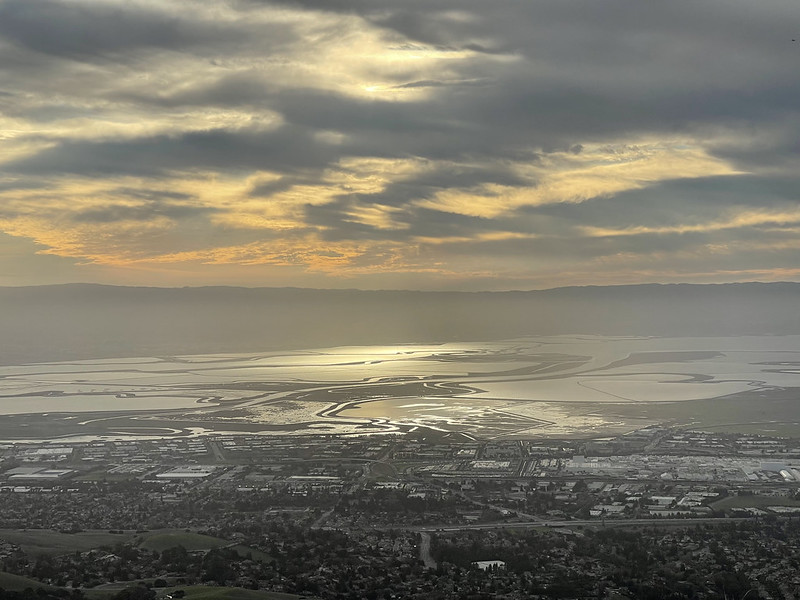 About forty-five minutes into my descent, I received a text message from a coworker requesting a data dump that I had been providing daily around 5:00pm each day this week. I had completely forgotten, and not finished the self-serve feature so that they could pull the data at any point. Channeling my inner Roy Kent, "F-----CK!" I set expectations as well as I could, and started hustling down the hill.

The downhill was still slow going, despite my sense of urgency. The sun was going down. The hill was steep. I passed quite a few people heading up when I was sure they should be heading down. One woman who hikes all around the park frequently stopped and talked with me for a bit, offering suggestions to the antenna farm off to the south. One couple asked me where the pipes were. The two of them were about an hour from the summit, with all of us on the mountain around thirty minutes before sunset. They had no water. They had light clothes on. I confirmed they wanted the landmark at the top that everyone stands on, they confirmed, so I told them it was on the summit, keep going up, at the ridge, turn left. "How close is it?" "The summit takes me two hours to climb," was my response, hoping they would figure out how long they had remaining to go. I don't believe they did, because they kept climbing up instead of turning around. They weren't the only ones, though. Another eight people were going up below them, some barely thirty minutes into the hike, and the sun was setting.

The pipe chat gave me a chance to rest my knees, however, but not enough to make a difference. I continued to hustle down the hill, with every step hurting. "It doesn't get easier, you just tolerate it better." I kept going, leaning heavily on my poles when I could, jogging on the easier flat ground, avoiding the trails with the cows firmly in the middle of them, and moving slowly when there was no other way. My knees hadn't hurt this much since last January before I started PT.

I finished the hike in 5:29, which was thirty minutes slower than my normal time. I am happy I completed the hike, but this one was HARD. I was grateful for Past Kitt™ who decided that packing hot tea as weight would be a good idea. It was. I drank it as a drove back, in a hurry again so that I could run the data dump, mildly annoyed that I had forgotten, and that I was, yet again, in a hurry and late.

I'm sure I will sleep well tonight. Every part of this hike was harder than the High Sierras hike, and that one was at 9000' elevation. This one was not. 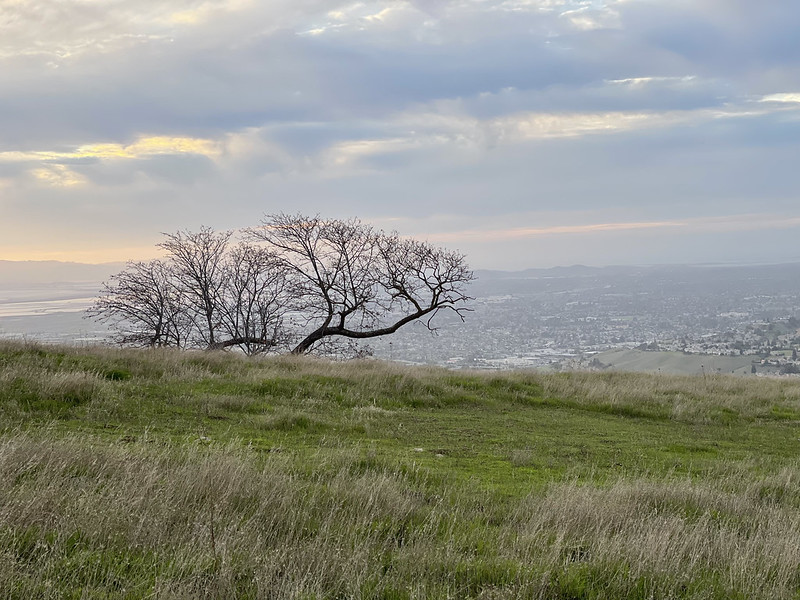