The Darkest Road« an older post
a newer one »The End of the World Running Club
Book Notes Posted by kitt at 18:39 on 20 September 2017 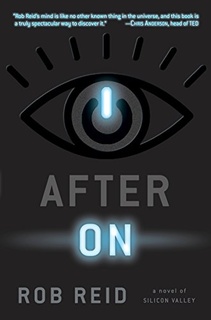 Okay, whatever you do, do not read this book. The writing of this book is so verbose, so desperately in need of an editor, so as to be nearly unreadable. Couple that with the location of the book, Silicon Valley, and the somewhat accurate portrayal of the places in Silicon Valley, of the stunningly stupid ideas that get funded, of the pervasive sense of entitlement, and of the vulgar pursuit of winning the IPO jackpot instead of actually building something meaningful, and you have a book that just screams crap.

Did I mention the verbosity?

Yeah, well the editing is worse. If you want to experience this book, listen to it on audiobook. At three times speed. Keep the pain as short as possible.

I was exporting some of the parts I thought might be worth quoting, and gave up. I just don't like this book. Moazam didn't either. I was on a road trip for 40 hours, I was a captive audience. Moazam wasn't. He couldn't finish it. Not recommended.

Upon it, an image of numerous foggy, craggy acres was rendered. “Do you recognize this terrain?” Dr. Phillips inquired. To the untrained eye, it might have been a region of the Scottish Highlands, or the maritime reaches of Oregon, or a temperate sector of Alaska.
Page 19

There, with plenty of smart, attractive women on hand, Mitchell’s like a kid in a candy store. A penniless, ravenous kid. One who can look all he wants, but that’s it. Or maybe “a meat-loving vegan at a cookout” maps better, because his hunger is principled, and self-imposed (and also, more primal than a grumpy sweet tooth). The thing is, Mitchell has essentially opted out of romance. It’s a long story.
Page 21

“Yes, they’ll say that,” Kuba agrees. “And they won’t be entirely wrong. Cynical. But not wrong. Because the tech itself could be used for practically anything, good or bad. It’s as value neutral as a smartphone. Or a computer.”
Page 27

But the biggest-paying advertiser, brand manager, and spin doctor will ultimately be us, the Phluttr user base. There are gold mines to extract from our desperate urge to be heard!
Page 31

You see, Fortune’s a bitch with a great sense of humor...
Page 37

Of course, all companies make hiring boo-boos. But when the true greats make them really early on, some real knuckleheads can get moronically rich. This effect produces plenty of accidental tech millionaires. Some accidental gazillionaires, too—but only a smattering of Pugwashes, and the man is rather famous. Some take his exquisite luck almost personally. Not merely those who worked far harder for far lesser bonanzai (although to be clear, those folks’re plenty pissed). But also those who are even richer still through their own godsends of timing, genetics, or happenstance, and have since fetishized a vision of the industry as an immaculate meritocracy. Those who fancy that they earned every dime of their tech fortunes through talent, toil, and daring (which is almost everyone who has one) regard any whiff of the lottery (Pugwash, for instance) as a PR liability.
Page 37

Because certain problems are completely resistant to increased rumination. But things are different for a diplomat who has spent years engaged in Russian-American relations. Not because he knows more facts and figures, because that stuff’s available to all of us via Google, now. But because his framework includes lots of intuition. Educated guesses. Vague rules of thumb that have just kind of worked over the years—that sort of thing.
Page 40

“Precisely. And by mastering Synthetic Biology and Nanotechnology, it will likewise be functionally omnipotent! As such, it could preclude the creation of any subsequent ‘me-too’ Super AI as easily as a Harvard Trained Biochemist could stop a helpless bacterium from reproducing in a petri dish!”
Page 50

Grown-up that he is, Mitchell can get a bit homesick when the chips are down, the weather’s blandly OK-ish for the bazillionth day in a row, and he’s gone yet another month without meeting a single fellow hockey fan. Even a lot homesick.
Page 51

Just as you rarely see something that’s perfectly blue in nature, unadulterated joy seems to be rare in human minds. More likely, we’ll see nine or ten happy motes, with other things mixed in.
Page 55

Fear comes in lots of flavors, but they’re all a mix of sadness and surprise, often with a dash of anger. Another example is indignation. That’s lots of anger, and a bit of surprise, with some sadness mixed in. And also, some happiness. Which makes sense when you consider that some folks really seem
Page 55

to enjoy being offended!
Page 55

And if you tried to heed every photon, sound wave, and nerve ending that you can access at once, you wouldn’t really be aware of any of it.” “You’re saying I’d be functionally unconscious.” “Exactly! Which is why you’re not currently registering the color of the ninth cookbook from the far left of the fourth shelf over my shoulder. You’re perceiving it. But you’re not heeding it.
Page 58

When he wasn’t incredibly bummed (rare, but it also happened)! Or, unbelievably pissed off (rarer still, but also happened)! His psyche was all binge and no purge—hammering either the gas or the brakes at all times!!!
Page 93

Man, talk about how I react.

“Is that Phluttr’s release about… Norway, is it?” Mitchell guesses. He’s been meaning to look it up himself.

“You realize you’re about to physically hand me a digital article,” Mitchell points out, “and how very odd that is. Are you sure you don’t just want to print it and fax it to me?”

“I want to see your reaction to this in person.
Page 114

This cracked me up.