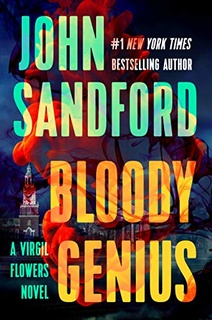 This is book 12 in the Virgil Flowers series.

Similar to the previous book, Flowers follows along a number of ideas before figuring out the murder in the end. The ending isn't as expected, but was still interesting. Quick read. If you're a fan, read it. If you aren't, this one is less amusing than the earlier books, so maybe start there instead.

The woman crunched herself up, made herself smaller, opened her mouth wide to silence her breathing, a trick she’d learned in another life while taking singing lessons.
Location: 97

She never saw the person with the phone but kept her arms over her face and her head down: faces shine in the dark, and eyes are attracted to eyes.
Location: 101

“You know it’ll piss off the Minneapolis cops,” Virgil said. “Does that bother you?” Virgil said, “Well, yeah, it does, as a matter of fact.” “Huh. Too bad. Doesn’t bother me at all, since I won’t be there,” Duncan said.
Location: 219

Virgil liked all the aspects of living on a farm, except for the farmwork.
Location: 284

... she made Virgil tote the wet bedsheets and blankets out to the line in the summer because, she said, they smelled like sunshine when they were dry. Virgil had to admit she was right about that.
Location: 292

There have always been kids who were no damn good, but now it’s everywhere. Everywhere. It’s kids who know they’re not going to be millionaires or billionaires or movie stars or famous singers or in the NBA, and it’s all they want. They can’t see past that. It’s like they’re not alive if they’re not on TV. They don’t want to be doctors or dentists or lawyers or businessmen, they want to be rich and famous right now. They don’t want to work. All they want is to be a celebrity. Then at some point they realize it ain’t gonna happen. They’re not talented enough or smart enough, and they sure as shit don’t want to work at getting to be famous. When they figure that out, that it ain’t gonna happen, they turn mean.”
Location: 1,016

“You get kids who’ll kill you for no reason. To feel important. What’s more important than killing somebody? You say, you’ll go to prison. They don’t care. They don’t even care if they die. They’ll tell you that. ‘Go ahead and kill me, I got no life.’”
Location: 1,022

"You know the phrase ‘rectally challenged’?”

“That’s the lawyer version of ‘He’s got a corncob stuck up his ass.’”

“That does sort of hold together,” Virgil admitted.

“Yeah, it does,” May said. “It has the massive disadvantage of being too complicated. It fucks over Occam and his razor."
Location: 1,640

Some guys joined the military for the adventure and the idea that they might turn out to be Rambo. Others joined because they didn’t know what else to do; they weren’t qualified for any particular civilian job and thought they might try the Army. Foster seemed to fall in the second group: not particularly aggressive, not angry with the world, just a guy struggling with what to do with his life that might have some significance.
Location: 1,755

“The only thing harder than knocking down a well-planned murder is knocking down one that wasn’t planned at all. If it’s totally unplanned and the killer gets past that first day, then it gets tough.
Location: 1,847

"Some days he’d come in—this was after he’d left his wife—and he’d have that look that men get after a night of hot sex,” Payne said. “The postcoital, empty prostate macho glow. Both relaxed and predatory, looking for a new target.”

“I didn’t know we got that look,” Virgil said.

Virgil had some time to kill before the meeting with Trane and the cop, so he stopped off in St. Paul for a Butter Flake Roll at Breadsmith, went next door for a Strawberry Surf Rider Smoothie from Jamba Juice, then idled around the corner and looked in a bookstore window until he finished eating and drinking his smoothie, then went inside and bought the latest Dave Robicheaux novel by James Lee Burke.
Location: 2,043

I find this a complete and total f'ing eyeroll. VERY CLEARLY product placement, and slightly offensive in its obviousness.

He didn’t know it but he’d missed something.
Location: 2,217

I find this transition, and it happens only a couple times in the book, annoying. The switch from third person to third person omniscient is jarring and unneeded.

Virgil went back to the hotel, hit Applebee’s—Bourbon Street Steak, fries, lemonade—got a brew at the beer joint,
Location: 2,371

In a way it was like weed, he thought while he shaved. Weed was everywhere, and arresting people on charges that would be dropped or result in no jail time, even with a guilty plea, were pointless and a waste of police time and a lot of money. A lot of money.
Location: 2,791

“About a million. You should be embarrassed.” Shrake shrugged, but in fact he was. Nothing like being the millionth guy to tell a bad joke.
Location: 3,058

You tended to look at him, with his car and his suit, and think, Asshat.
Location: 3,061

They ate for a while, then Virgil said, “I just had a thought.”

Krause bulled his way through mall traffic and then past Mattress Firm and Verizon stores...
Location: 4,459

More stupid product placement. If the author gets money for writing this crap, the reader should receive money for losing the attention with this crap.

Trane would have them evaluated the following week, and a Minneapolis coin dealer suggested they’d be worth around a hundred and fifty thousand dollars.
Location: 4,537

More jarring writing, this time with the tense changing from present to future. Is this needed?