Stiff« an older post
a newer one »Rising Out of Hatred
Book Notes kitt decided around 14:45 on 28 August 2019 to publish this: 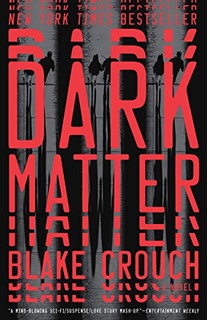 I bought this when it first released, and left it on my shelf for when the time came that I would want to read it. As in, read an actual book, and not an electronic book. The time came, and I enjoyed reading this book. I'd argue that Pines, the first book of the Wayward Pines trilogy, is a better first book than this one, but this one is still an entertaining book to read.

The plot starts out with the kidnapping of the quantum physics professor Jason Dessen, who finds himself in an alternate timeline, and his journey back to his own timeline, his own family.

While one could argue the book is an object lesson about not messing with timelines if every decision ripples out in cascading, compounding changes in the multi-verse, I'm pretty sure that's not what Blake is attempting with the book. A better take would be a reflection about how one can following that slippery slope provided by circumstances to do actions they would never even consider without fate's push, or even an existential look at how one decides one has had a good (or good-enough) life.

It's a fun read, if unnecessarily and unsuccessfully angsty at time. If you're a Blake fan, worth reading. If you're not, wait for the next two books, as it is a trilogy. I don't think I'll be reading the other two.

There’s an energy to these autumn nights that touches something primal inside of me. Something from long ago. From my childhood in western Iowa. I think of high school football games and the stadium lights blazing down on the players. I smell ripening apples, and the sour reek of beer from keg parties in the cornfields. I feel the wind in my face as I ride in the bed of an old pickup truck down a country road at night, dust swirling red in the taillights and the entire span of my life yawning out ahead of me. It’s the beautiful thing about youth. There’s a weightlessness that permeates everything because no damning choices have been made, no paths committed to, and the road forking out ahead is pure, unlimited potential.
Location: 238

Experimental physics—hell, all of science—is about solving problems. However, you can’t solve them all at once. There’s always a larger, overarching question—the big target. But if you obsess on the sheer enormity of it, you lose focus. The key is to start small. Focus on solving problems you can answer. Build some dry ground to stand on. And after you’ve put in the work, and if you’re lucky, the mystery of the overarching question becomes knowable. Like stepping slowly back from a photomontage to witness the ultimate image revealing itself.
Location: 1,304

The crowd responds in turn, and as everyone drinks, I move toward her. In proximity, she’s electric, so sparkling with life that I have to restrain myself from calling out to her. This is Daniela with an energy like the first time we met fifteen years ago, before years of life—the normalcy, the elation, the depression, the compromise—transformed her into the woman who now shares my bed: amazing mother, amazing wife, but fighting always against the whispers of what might have been.
Location: 1,403

They have dinner in the city at a nicer restaurant than they can afford and spend the entire time talking like they haven’t talked in years. Not about people or remember-whens, but ideas.
Location: 1,786

“Sometimes, an extreme stress situation can trigger what’s called psychogenic amnesia, which is abnormal memory functioning in the absence of structural brain damage. I have a feeling we’re going to rule out any structural damage with the MRI today. Which means your memories from the last fourteen months are still there. They’re just buried deep in your mind. It’ll be my job to help you recover them.”
Location: 2,069

I suppose we’re both just trying to come to terms with how horrifying infinity really is.
Location: 2,552

Lately, their family dinner conversations have centered around ideas, books, and articles Jason is reading, and Charlie’s studies, instead of a mundane recounting of the day’s events.
Location: 2,874

We catch a hard, beautiful glow off the booze, and our conversation stays very much in the moment. How the food is. How good it feels to be inside and warm.
Location: 3,407

“It was. I don’t miss the box, but it’s strange being away from it.” “I don’t know about you, but my old world is feeling more and more like a ghost. You know how a dream feels the farther you get from it? It loses its color and intensity and logic. Your emotional connection to it fades.” I ask, “You think you’d ever forget it entirely? Your world?” “I don’t know. I could see it getting to the point where it didn’t feel real anymore. Because it isn’t. The only thing that’s real in this moment is this city. This room. This bed. You and me.”
Location: 3,438

Randomness. How do you beat an opponent who is inherently wired to predict any and all moves you might make? You do something completely random. Unplanned. You make a move you haven’t considered, to which you’ve given little or no prior thought. Maybe it’s a bad move that blows up in your face and costs you the game. But perhaps it’s a play the other you never saw coming, which gives you an unanticipated strategic advantage. So how do I apply that line of thinking to my situation? How do I do something utterly random that defies anticipation?
Location: 4,226

it makes her sad. “Do you think I was happy?” she asks. “What do you mean?” “With everything I’d given up to be this woman.” “I don’t know. I was with this woman for forty-eight hours. I think, like you, like me, like everyone, she had regrets. I think sometimes she woke up in the night wondering if the path she took was the right one. Afraid it wasn’t. Wondering what a life with me might have been like.” “I wonder those things sometimes.” “I’ve seen so many versions of you. With me. Without me. Artist. Teacher. Graphic designer. But it’s all, in the end, just life. We see it macro, like one big story, but when you’re in it, it’s all just day-to-day, right? And isn’t that what you have to make your peace with?”
Location: 4,880