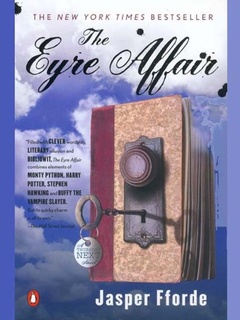 Book one of the Thursday Next series, I don't think I will be reading the rest of the series. The book is a book about books, in as much as the plot revolves around a fictional England, mid-1980s, where time travel is a thing, and everyone is a book lover. I mean, let's start there with the difficulty of suspending disbelief, really.

The plot goes along the lines of Next being called to a secret service who is trying to apprehend Acheron Hades, who is immune to bullets, can waft through glass, and can control weak minds. Next is called up because she took a class from Hades in college. We learn of Next's history fighting in the Crimean War between England and Russian, of how her brother died in the war, and she went back for him after leaving him. Next's uncle is an inventor who has developed book worms who create worlds based on the words they consume (read: poetry and prose, fictional worlds made alive). Hades uses this invention to rewrite fictional characters, using the original manuscripts and the worms to make the fictional characters real. His rewrite of Jane Eyre would have had a large impact with me if I had actually, you know, read Jane Eyre and knew the original plot. I didn't, so I didn't have the same gut punch that other people may have.

Because of her personality (do the right thing, follow through, strong willed, etc.), Next helps a number of people in the story, which leads to the revelation needed to defeat Hades. Because, let's face it, the man was pretty much unbeatable.

I enjoyed the book, but not enough to continue reading the series.