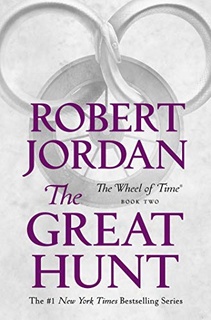 Right. At this point, I should be on book four or so of this series,, but I am not. This bingo square is guaranteed to thwart my other bingo square of 100 books read this year.

Okay, so, the book starts where The Eye of the World left off, with our merry band of Emmoners near the Blight. Along comes the Amyrlin Seat (the head of the Aes Sedai), who tells Rand, hey, she knows his secret, we're good, we've been looking for you. While this is happening, no one figures out the grumpiness from the cellar prison is from Fain, so along comes a herd of trollocs to break Fain out of prison, taking the Horn of Valere and Mat's dagger with him. Well, there we go, Rand needs to head off with his buds to find the horn and the dagger. Off they go.

Rand disappears from the merry band, traveling via other worlds accidentally in his sleep, fortunately with Loial and Hurin, The two of them find the Horn and the dagger, head to find Lanfear, er, Selene, who has been quite stunningly hitting on Rand, duh, but manage to lose both the Horn and the dagger to Fain again. Nynaeve and Egwene head off to Tar Valon, where Nynaeve goes through the Accepted initiation. They don't stay there long as they are lured away by Liandrin, a two-dimensional Red, but clearly Black. Fortunately, Elayne and Min come, too.

Meanwhile, the Seanchan are invading Toman's Head, which is where everyone ends up, as Liandrin dumps the four girls there, with the intention of handing all four of them over to be damane, or enslaved women channelers. Rand and his group are forced to Toman's Head by Fain, who took the Horn and dagger there. Hilarity ensues, much death, some destruction, all our heroes survive, one bit of "wait, what? no!"

I really like this series, as much as I have read of it. Given the series is going to be another epic saga via some paid television channel, sorta makes sense to read them. I strongly recommend the series if you enjoy sf/fantasy novels.

"Darkfriends multiply, and what we called evil but ten years ago seems almost caprice compared with what now is done every day.”
Page 87

Well, that rather sounds like our last three years of the United States, now doesn't it?

"Whatever else I am, I’m a shepherd and a farmer. That’s all.”

“Well, the sword that could not be broken was shattered in the end, sheepherder, but it fought the Shadow to the last. There is one rule, above all others, for being a man. Whatever comes, face it on your feet. Now, are you ready?"
Page 132

Nynaeve touched her cheek. She could still feel where he had touched her. Mashiara. Beloved of heart and soul, it meant, but a love lost, too. Lost beyond regaining.
Page 146

There were only two things wolves hated. All else they merely endured, but fire and Trollocs they hated, and they would go through fire to kill Trollocs.
Page 228

“That should shield us from it.” He hoped it would. Lan said the time to sound most sure was when you were least certain.
Page 289

Or, I don't know, be realistic and let others know that you're full of it?

“I’m sorry you had to do it, Loial, but it would have killed both of us, or worse.”

"People see what they expect to see. Beyond that, look them in the eye and speak firmly."
Page 429

She found it hard to think that there had been a time when she had been eager to have an adventure, to do something dangerous and exciting like the people in stories. Now she thought the exciting part was what you remembered when you looked back, and the stories left out a good deal of unpleasantness.
Page 518

She sniffed. “If I were being held prisoner, I would not help my captors find other women to enslave. Although, the way these Falmen behave, you would think they were lifelong servants of those who should be their enemies to the death.” She looked around, openly contemptuous, at the people hurrying by; it was possible to follow the path of any Seanchan, even common soldiers and even at a distance, by the ripples of bowing.

How easy it is to declare what someone else should do when you haven't had the same experiences, endured the same hardships, seen the same events.

This is madness. There can’t be grolm here. Thinking it did not make the beasts disappear, though.
Page 589

“Rand would kill someone who did a thing like that,” Elayne said. She seemed to be steeling herself. “I am sure he would.”

“Perhaps they do,” Nynaeve said, “and perhaps he would. But men often mistake revenge and killing for justice. They seldom have the stomach for justice.”
Page 604