Tiamat's Wrath« an older post
a newer one »Lies Sleeping
Book Notes Yeah, kitt finished writing this at 07:00 on 20 May 2019 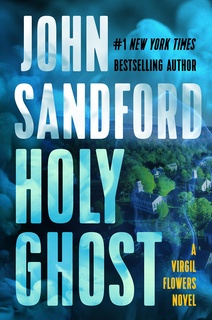 This is book 11 in the Virgil Flowers series.

I really want to have some clever plot synopsis for this book, the town is dying, to put it on the map some of the residents decide to deceive a whole bunch of people with an image of the Virgin Mary. Along comes a lot of people, all trying to get a piece of the Mary, which means you have good people trying to debunk the visions, bad people trying to make money off the process, religious people trying to prove or disprove the miracle, and suspicious people wondering why they recognize said Mary.

Enter Flowers, to figure out who is killing said dying people. Because that's what he does.

Unlike previous books, where Flowers knows the answer immediately, we have more than a few it's this guy, no wait, it's that guy, no wait, this other guy. Which is far more likely to be reality. Unlike reality, Flowers actually keeps an open mind when the facts don't fit instead of making the data fit the hypothesis. Yay fiction!

Again, if you're a Flowers fan, the book is worth reading, I'll read the next one. Starting at first book is strongly recommended, both to see the Flowers humour which is stronger in the earlier books and to know the characters.

When he was in college, years earlier, during the usual late-night weed-fired discussions of sex, politics, and religion, he’d decided that religions and political parties were quite alike, except that religions dealt with morality, primarily, while political parties dealt with economics. In other words, they were both dealing with people’s deepest feelings about how the world should work. Differences could escalate to physical clashes, as they might have even in the late-night weed-fired college discussions, except, of course, for the weed: “You’re so full of shit, dude. Pass the joint.” Now, lying in bed all these years later, he still wondered why religions, since they dealt with morality, shouldn’t shun any form of violence to others? Then again, he thought, maybe they did. Maybe the connection between religion and violence was Fake News.
Location: 1,057

Virgil didn’t expect to find anything meaningful, and they didn’t. The first floor was what you’d expect if somebody had just walked out, locked
Location: 1,740

the door, and then died. An unwashed coffee cup on a kitchen table, a slender glass vase with three bluebells next to the cup.
Location: 1,741

A tear trickled down Osborne’s cheek. “I can’t, either . . . Somehow, you think your mom is going to last forever, even if you know she won’t.
Location: 3,600