Only Human« an older post
a newer one »Brief Cases
Book Notes Written with a loving hand by kitt some time around 21:30 on 7 December 2018 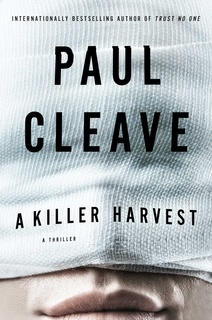 Okay, while Mom and I were walking in Copenhagen (I love that I can say that), I mentioned how delighted I was with the previous Paul Cleave book I had read. She immediately and enthusiastically agreed with my delight, then tried to remember which of his other books she really liked.

Out came Libby and we scrolled through the list at the library, and this was on the list and this was the one she really liked. boom! onto my hold list it went.

That a kid can go from no sight to depth recognition in moments was also a bit farfetched, too. And not having any infection after the craziness of the surgery bumbling? No.

But, hey, it's fiction. Found out it is Young Adult fiction, which made it fun. I wish I had known it was YA, as I would have approached it differently.

I enjoyed the book. Trust No One is better, but this was still a fun read. If you're a Cleave fan, definitely read it.

That’s the trick to this — keep moving forward fast enough to stop the bad news from catching up.
Page 20

His dad once said that bad news for everybody else is big news for the media. He would often say, It’s human tragedy that keeps them employed.
Page 22

"... your father fell from a great height. He would have died instantly. He wouldn’t have felt a thing.”

“Except he would have,” Joshua says. “He would have felt fear all the way down, and the higher he fell from, the longer he got to feel it.”
Page 23

"You have to plan for how the world is now, not for how it might be. And of course you can hope. We can all hope.”
Page 31

“Because people who don’t like themselves are drawn to the idea of belittling others online.”
Page 59

Neither of them excelled in school, neither of them went to university, both of them were concerned with current events but never willing to help make change. They didn’t vote, because they didn’t see a point, neither had had a relationship that lasted longer than a few months, and even then those relationships were few and far between.
Page 68

This describes most other people, does it not?

Did everybody else in Simon’s life think so little of him that they actually believe he did those bad things? Of course, he did do them, but why aren’t people doubting that? They can’t know, not for sure, yet they’re quick to believe the worst.
Page 75

The lift arrives. The door opens. She steps in and the guy steps in. He smiles at her and presses the button, then stands in one corner while she stands in the other. She wonders when everybody jumped on the unwritten rule that you couldn’t make conversation in a lift. People can chat in all sorts of situations, they’ll say hi as they pass by on the street, they’ll make chitchat buying groceries, or at a bar, or a sports game, or in a queue — but making small talk with a stranger in a lift is committing a cardinal sin...
Page 92

I was laughing at this one.

I'm the person who stands the wrong way in an elevator so that I can see everyone, and then starts talking.

Hope strung out is still hope, but it feels like hell.
Page 236

The exercise isn’t completely pointless — those who took and uploaded the pictures will all be charged, and hopefully it will send out a message to others willing to do the same stupid thing. Only she doesn’t think it will. The kind of person who takes a photograph of a dead teenage boy and puts it online isn’t the kind of person who understands how society should work.
Page 248

Peterson is one of those guys who use their hands a lot when they talk.
Page 248

“Dad used to say the world was full of good people willing to do nothing.”

He tells her how normal it was, and in a way that made it more frightening — how can you find monsters when they can live like anybody?
Page 297