Brief Cases« an older post
a newer one »The Late Show
Book Notes Yeah, kitt finished writing this at 18:20 on 14 December 2018 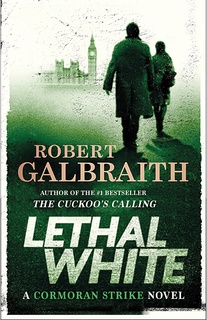 Okay, when J. K. Rowling writes, she uses a lot of words. This has been happening since book four of the Harry Potter series, and it carried over into this series.

Except, in this book, I didn't feel like it had too many words. So either I've become used to too-many-words, or Rowling's editor managed to convince her to trim the excess with this book.

I enjoyed this book. It isn't a short book, taking most people 11 hours to read, it took me a couple hours less, but that's still a lot of words.

The book starts off pretty much where the last one ended, Robin's wedding, and does a number of flashbacks and fast-forwards to tell the story of that day, week, month. The first part had a number of miscommunications and interfering people and George Costanza awkwardness that I almost stopped reading it. I kept going, and enjoyed the book.

There are a couple mysteries in the book, with the bulk following an unhinged Billy as he deals with memories of childhood violence that may or may not have happened, and a separate investigation of the blackmailing of a government official. I will admit to having spent most of the book trying to figure out what would have been legal six years before, and is no longer legal, and why that would be blackmailable. I suspect this was part of the delight of the mystery.

The Cormoran / Ellacott partnership works well professionally, but both of them long for the other in the book, which leads to a stressed professional relationship. I guess this makes for good tension in a mystery book? Maybe?

Anyway, if you're reading the series, keep going. If you haven't started, start at the first one and make it through the second one. These last two have been fun. Not Harry Potter books 1-3 fun, but adult action-mystery fun.

Matthew had sought to deny her the thing that might save her, the thing for which she had cried in the small hours of the night when everybody else was asleep: the restoration of her self-respect, of the job that had meant everything to her, of the friendship she had not known was one of the prizes of her life until it was torn away from her.

Matthew had lied and kept lying. He had smiled and laughed as she dragged herself through the days before the wedding trying to pretend that she was happy that she had lost a life she had loved. Had she fooled him? Did he believe that she was truly glad her life with Strike was over? If he did, she had married a man who did not know her at all, and if he didn’t…
Location 323

“You don’t get to make those decisions for me!” she yelled.
Location 389

“You see,” Robin had continued with the speech she had prepared, “my life is pretty much wall to wall with people who think they know what’s best for me.”

“Well, yes,” said the therapist, in a manner that Robin felt would have been considered condescending beyond the clinic walls, “we’ve discussed — ”

“ — and…” Robin was by nature conciliatory and polite. On the other hand, she had been urged repeatedly by the therapist to speak the unvarnished truth in this dingy little room with the spider plant in its dull green pot and the man-sized tissues on the low pine table. “… and to be honest,” she said, “you feel like just another one of them.”
Location 743

“We can’t throw it all away, can we?” he had asked her hoarsely from the bed where the doctor had insisted he stay. “All these years?”
Location 860

His personality filled the room like the first bar of a hit song. Strike knew him from those few words as the kind of man who, in the army, was either outstandingly useful or an insubordinate bastard.
Location 1069

“No,” lied Strike, because he knew what it felt like to have your personal details strewn across the newspapers. It was kindest, if at all credible, to pretend you hadn’t read it all, politest to let people tell their own story.
Location 1663

He had wanted to believe her when she had told him how glorious it was to have her flat to herself and her freedom restored, yet lately he had felt tiny spots of displeasure when he had told her he had to work weekends, like the first heavy drops of rain that presage a storm.
Location 1840

There was, after all, little pleasure to compare with that given by a woman who really wanted you, he thought
Location 1853

From a distance of two years, he saw himself trying to hold tight to some part of his past as everything else slipped away.
Location 1862

Strike had learned many tricks and secrets, become adept ferreting in even the darkest corners of the internet, but often the most innocent social media sites held untold wealth, a minor amount of cross-referencing all that was necessary to compile detailed private histories that their careless owners had never meant to share with the world.
Location 1886

In Strike’s experience, those who disdained the use of representation in court were either unbalanced or so arrogant that it came to the same thing.
Location 1919

Robin had dwelled at length on her need to discern where the real Matthew ended and her illusions about him began. “People change in ten years,” the therapist had responded. “Why does it have to be a question of you being mistaken in Matthew? Perhaps it’s simply that you’ve both changed?”
Location 2561

And sometimes, she knew, the kindness of a stranger, or even a casual acquaintance, could be transformative, something to cling to while those closest to you dragged you under in their efforts to help.
Location 2969

For the first time ever, Robin had sex with Matthew that night purely because she could not face the row that would ensue if she refused.
Location 3171

Only love could have justified the havoc they had lived together, or the many times he had resumed the relationship, even while he knew in his soul that it couldn’t work. Love, to Strike, was pain and grief sought, accepted, endured.
Location 3217

Lorelei’s willingness to accept the casualness of their current arrangement did not stem from a shared sense of disengagement, but from a desperation to keep him on almost any terms.
Location 4561

“People always say that,” he grunted. “It is the money, and it isn’t. Because what is money? Freedom, security, pleasure, a fresh chance…"
Location 5643

“You wanted things I couldn’t give you. Every single fucking time, you hated the poverty.”

“I acted like a spoiled bitch,” she said, “I know I did, then I married Jago and I got all those things I thought I deserved and I want to fucking die.”

“It goes beyond holidays and jewelry, Charlotte. You wanted to break me.” Her expression became rigid, as it so often had before the worst outbursts, the truly horrifying scenes. “You wanted to stop me wanting anything that wasn’t you. That’d be the proof I loved you, if I gave up the army, the agency, Dave Polworth, every-bloody-thing that made me who I am.”
Location 6657

"I gave you the best I had to give, and it was never enough,” he said. “There comes a point where you stop trying to save the person who’s determined to drag you down with them.”
Location 6670

"He came from a background that finds anything that deviates from its own conventions and norms to be suspect, unnatural, even dangerous. He was a rich white Conservative male, Mr. Strike, and he felt the corridors of power were best populated exclusively by rich white Conservative males. He sought, in everything, to restore a status quo he remembered in his youth."
Location 7238

“Yet she stayed with him. Of course, people do stay, even when they’re treated abominably."
Location 7260

"... it will go the way it always goes in the press when it all comes out: it will have been my fault, all of it! Because men’s crimes are always ours in the final analysis, aren’t they, Mr. Strike? Ultimate responsibility always lies with the woman, who should have stopped it, who should have acted, who must have known. Your failings are really our failings, aren’t they? Because the proper role of the woman is carer, and there’s nothing lower in this whole world than a bad mother.”
Location 7369

Life had taught him that a great and powerful love could be felt for the most apparently unworthy people, a circumstance that ought, after all, to give everybody consolation.
Location 7394

“You liked it, you liked me being stuck at home, why can’t you admit it?"
Location 7516

I think marriage is nearly always an unfathomable entity, even to the people inside it, Della Winn had said.
Location 7578

“You can bloody hate someone and still wish they gave a shit about you and hate yourself for wishing it.”
Location 7920

Robin took the tissue and, with one hearty blow of her nose, demolished it.
Location 8383