The Spy and The Traitor« an older post
a newer one »The Bell Jar
Book Notes Instead of being asleep at 11:02 on 28 September 2019, kitt created this: 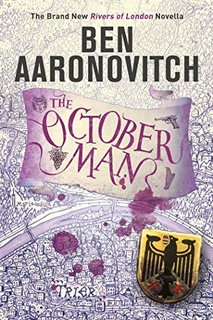 Okay, this was a delightful, fast read.

Set in the Peter Grant / Rivers of London universe, we have Tobias Winter as the sole practitioner investigator in Germany, Deutschland's equivalent of Peter Grant, called into a suspicious death. He is partnered with Vanessa Sommer, an enthusiastic (and normal) investigator local to Trier, in solving the case.

Yes, I, too, was delighted by the summer and winter pairing.

The book is a quick read, what, being book 7.5 of the Rivers of London series, a novella. The "short" story (long story, but shorter than a novel) is a delightful way to both introduce new characters into the series (we're sure to see Toby in the Peter books soon), and to expand the world building.

That the murder had elements of wine making made it more entertaining.

I enjoyed the book. If you're a Ben Aaronovitch or Rivers of London fan, definitely keep reading.

‘“The wrong case’ isn’t about danger. You only have to spend a couple of nights with Traffic to know that anybody can die suddenly,” said Stefan, proving once again that he was the joyful heart of any social event.
Location: 55

Jacqueline Stracker gave us the traditional look of weary outrage that you always get from someone who thinks they don’t have time for this shit—whatever this shit happens to be.
Location: 275

Vanessa made a strange inarticulate sound common to Germans who’ve figured out how to start a sentence but don’t know how it ends.
Location: 423

As police you can live with the violence, the squalor and the stupidity—it’s the waste of people’s futures that really grinds you down.
Location: 545

“I don’t think the drinking club would have lasted much longer,” said Vanessa, as I wrestled with the total lack of a proper slotted spatula and had to turn my steaks with a wooden scraper instead.
Location: 1,592

He was obviously one of those people who basically ignore the parts of the world that don’t interest him.
Location: 1,695