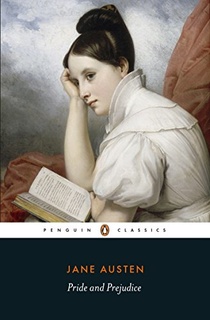 I hadn't read this book before. I don't know that I would have found has insightful or as hysterical as I do now, had I read it when I was younger.

This was my first Jane Austen book, which is probably not something I should admit. The parts where, well, simple human misunderstanding causes all sorts of mayhem, had me laughing at the absurdity. Aren't we all like this, though?

Yes, at some time or another.

And yes, reading this book means I've given up on reading only non-fiction this year. 38 books in, I had a good run.

Elizabeth's courage did not fail her. She had heard nothing of Lady Catherine that spoke her awful from any extraordinary talents or miraculous virtue, and the mere stateliness of money or rank she thought she could witness without trepidation.
Page 184

It was not in her nature, however, to increase her vexations by dwelling on them. She was confident of having performed her duty, and to fret over unavoidable evils, or augment them by anxiety, was no part of her disposition.
Page 265

This is not the sort of happiness which a man would in general wish to owe to his wife; but where other powers of entertainment are wanting, the true philosopher will derive benefit from such as are given.
Page 270

Upon the whole, therefore, she found, what has been sometimes found before, that an event to which she had been looking with impatient desire did not, in taking place, bring all the satisfaction she had promised herself.
Page 271