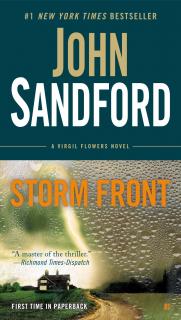 Okay, so, this one was a twist on the f---in' Flowers plot lines: there was no murder to investigate. I rather like that about this book, and the storyline. It was an adventure, a high-speed car chase. While some people were shot at, no one died. What I found most peculiar, and delightful, is that everyone in the book specifically didn't want to kill people. There wasn't a hair-trigger "let's go kill me some people!" reaction that seems prevalent in most mysteries / adventure / action / westerns books. It becomes a little uncomfortable because, well, it's a thought process so far removed from mine that it's, eh, yeah, discomforting.

I enjoyed this book. It ended amusingly. I recommend this book if you've liked the series so far.

That all said, what really hit home for me in these books is the level of communication that Flowers has with his boss, Davenport (who is, I'm told, the central character in Sandford's Prey series of books). Flowers keeps his boss in the loop on his activities, relies on his boss for help (because, really, that's what a manager is supposed to do: enable his employee to do his best), helps his boss when he can, and delivers results.

I don't know why I hadn't noticed it in previous books, it really stood out for me in this one. I like it. I don't like telling people (read: leads and bosses) bad news, but if I don't tell them, they can't help me at the exact point I need the most help.

I think, along with my super-powers speaking shirt, I am going to start using my Flowers over-communicator. I like that personality facet of Flowers.

Even if he is a fictional character, I can still be inspired by him.