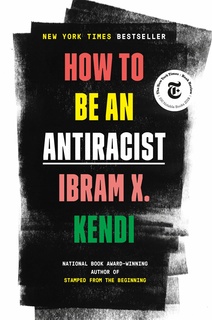 I strongly recommend this book. It might not be life-changing, but I will buy you a copy for you to read, I recommend it that much. The experience of reading the book is significantly different than listening to the audiobook, which is read by the author, and veers into some church-preaching styles. I am not a fan of that particular style of speaking to start. I also tend to avoid author-narrations in general, as most are meh given most authors are not voice professionals. In general, I VERY MUCH prefer reading over audiobooks, so sticking with the book didn't bother me. YMWV.

The book is Kendi's personal journey through racism and his own work in overcoming his own biases. Along the way, we learn about his lessons, along with a commentary about what being an antiracist means. There are a number of maxims about being antiracist in the book, all of which can be applied to pretty much everyone. I appreciate how the lessons are taught as part of Kendi's story (and good lord what a story, why does this family have so much cancer in it, and all at such young ages, argh!), making the stories more relatable.

The one lesson I would ask anyone who read this book to come away with is this:

Making individuals responsible for the perceived behavior of racial groups and making whole racial groups responsible for the behavior of individuals are the two ways that behavioral racism infects our perception of the world. In other words, when we believe that a racial group’s seeming success or failure redounds to each of its individual members, we’ve accepted a racist idea. Likewise, when we believe that an individual’s seeming success or failure redounds to an entire group, we’ve accepted a racist idea.
Location: 1,465

Each person must be judged on their own merits. One person is not the representative for their gender, age-group, race, species. If this were the case, all white men are terrorist serial killer rapists. We have many examples of this not being the case. One bad meal does not make all restaurants awful, why would one bad day make all women bitchy, or all black men thugs (answer: it doesn't, they aren't). If we can keep this in mind, we have a chance.

Let me buy you a copy.

Definitions anchor us in principles. This is not a light point: If we don’t do the basic work of defining the kind of people we want to be in language that is stable and consistent, we can’t work toward stable, consistent goals.
Location: 262

My parents followed Norton’s directive: They fed me the mantra that education and hard work would uplift me, just as it had uplifted them, and would, in the end, uplift all Black people. My parents—even from within their racial consciousness—were susceptible to the racist idea that it was laziness that kept Black people down, so they paid more attention to chastising Black people than to Reagan’s policies, which were chopping the ladder they climbed up and then punishing people for falling.
Location: 413

Americans have long been trained to see the deficiencies of people rather than policy. It’s a pretty easy mistake to make: People are in our faces. Policies are distant. We are particularly poor at seeing the policies lurking behind the struggles of people.
Location: 425

Black self-reliance was a double-edged sword. One side was an abhorrence of White supremacy and White paternalism, White rulers and White saviors. On the other, a love of Black rulers and Black saviors, of Black paternalism. On one side was the antiracist belief that Black people were entirely capable of ruling themselves, of relying on themselves. On the other, the assimilationist idea that Black people should focus on pulling themselves up by their baggy jeans and tight halter tops, getting off crack, street corners, and government “handouts,” as if those were the things partially holding their incomes down.
Location: 469

We are what we see ourselves as, whether what we see exists or not. We are what people see us as, whether what they see exists or not. What people see in themselves and others has meaning and manifests itself in ideas and actions and policies, even if what they are seeing is an illusion. Race is a mirage but one that we do well to see, while never forgetting it is a mirage, never forgetting that it’s the powerful light of racist power that makes the mirage.
Location: 562

In fact, immigrants and migrants of all races tend to be more resilient and resourceful when compared with the natives of their own countries and the natives of their new countries. Sociologists call this the “migrant advantage.” As sociologist Suzanne Model explained in her book on West Indian immigrants, “West Indians are not a black success story but an immigrant success story.”
Location: 1,044

With ethnic racism, no one wins, except the racist power at the top. As with all racism, that is the entire point.
Location: 1,049

It makes racist sense to talk about personal irresponsibility as it applies to an entire racial group. Racial-group behavior is a figment of the racist’s imagination. Individual behaviors can shape the success of individuals. But policies determine the success of groups. And it is racist power that creates the policies that cause racial inequities.
Location: 1,463

Racist ideas often lead to this silly psychological inversion, where we blame the victimized race for their own victimization.
Location: 1,954

To be antiracist is to never conflate racist people with White people, knowing there are antiracist Whites and racist non-Whites.
Location: 2,017

We must discern the difference between racist power (racist policymakers) and White people.
Location: 2,021

Racist power, hoarding wealth and resources, has the most to lose in the building of an equitable society.
Location: 2,029

The saying “Black people can’t be racist” reproduces the false duality of racist and not-racist promoted by White racists to deny their racism.
Location: 2,252

To say Black people can’t be racist is to say all Black people are being antiracist at all times. My own story tells me that is not true. History agrees.
Location: 2,261

It is best to challenge ourselves by dragging ourselves before people who intimidate us with their brilliance and constructive criticism. I didn’t think about that. I wanted to run away. They did not let me run away, and I am grateful now because of it.
Location: 3,121