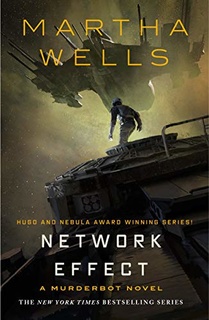 Finished this one in two days and, unsurprisingly, adored it as much as I enjoyed the previous four books. I picked it up when my frustration with The Making of a Manager grew too large, and Ginsberg's My Own Words would not sooth the agitation of the previous book. Sometimes you need an adventure to cleanse your palette of the crap that is incompetence and surveillance, and even RBG can't do it. Enter Wells and Murderbot.

Following Exit Strategy, Murderbot is in the employ of The Preservation, and is off on a full-length adventure that lasts more than one short mystery (read: novella) solution. He (It?) is tasked with taking care of Mensah's daughter on her first expedition, which goes sideways (because Murderbot).

This book is just so delightful. We have mystery. We have emotions (shock, even from Murderbot)! We have a plot that just doesn't stop, absurd situations that are, as ART says, "unreal," and laugh-out-loud deadpan humor that I love.

Basic plot: Murderbot is on an expedition with Amena, who didn't originally like Murderbot because said SecUnit interfered with a tryst that was going to go bad, but Amena being young didn't realize was a con by a Corporate spy. Of course, bonds forged by trial, aliens, spaceship attack, and all, and Amena and Murderbot like each other. Along the way, that asshole research transport returns, we go off to find its crew, a few more Preservation crew show up, along with a few grey men, and hilarity ensues. No, really, the hilarity in the writing of the Murderbot dialog and thoughts is fantastic. None of the quotes I pull out are amusing when isolated, and hysterical in context.

I enjoyed these books so much. I'm glad there's another book following.

This is book 1 in the MurderBot Diaries, and it is a fun read. I've had it in my to-read pile for a long while now, arriving there from a recommendation on microblog.

I found the book particularly amusing in that Murderbot, who is a construct with mechanical (robot) and organic (human) parts fused together to have essentially a controllable super-human, thoroughly reminded me of an acquaintance I have. Said acquaintance is very literal, doesn't give a shit about most things, is straight-forward about nearly everything, and really just wants to be left alone.

In this first of the series, we have world building, where we understand what the Murderbot is, learn a bit about its history (it went haywire and killed a crew), and come to understand the broad strokes of its personality. It is hard not to sympathize with the Murderbot, even as it is, well, a Murderbot.

Love Wells' writing, and am eagerly anticipating reading the next three books in the series. Strongly recommended (bonus: it's a fast read).

“All right,” she said, and looked at me for what objectively I knew was 2.4 seconds and subjectively about twenty excruciating minutes.
Page 22

It was a low-stress group, they didn’t argue much or antagonize each other for fun, and were fairly restful to be around, as long as they didn’t try to talk or interact with me in any way.
Page 30

I also checked to make sure both the big hopper and the little hopper had their full complement of emergency supplies. I packed them in there myself days ago, but I was mainly checking to make sure the humans hadn’t done anything stupid with them since the last time I checked.
Page 34