Well, today was one of the shittiest days of the year. Perhaps not the worst, but, in the top 5%. Sure, life could be worse (WAY worse), but this one was sufficiently bad that I did something I had not done before: I turned to my dad for emotional support.

We had a long streak going on where we would text each other daily. He's been sufficiently overwhelmed by the pandemic that he manages maybe one or two days a week now. I hadn't heard from him in a good four days, so I called him. We chatted with the usual chit-chat, shallow greetings for a bit, and then he asked how I was doing.

"Six buckets of shit worth of bad, Dad."

He laughed. I do so enjoy hearing his laughter, much the same as I enjoy hearing the laughter of all of the important men in my life, so that brightened the day slightly.

We talked a little more about my buckets of shit, what each was filled with. Eventually, I admitted that none were farther away than 100 meters, and well within my shooting range, which I think delighted him even more. Worse case, I could shoot the crap out of them. He gave me a few words of encouragement about dumping out the buckets. I guess I could hand one of the buckets to someone else, or, you know, just walk away from a bucket or two. Maybe let one sit and decompose into a bucket of life-giving compost to fertilize the next thing.

I don't know. Mom is always uncomfortable when I start talking scatologic. Maybe talking shit with Dad was more comforting that I realized it could be.

Two Boats and a Helicopter

Him: "Well, are you passionate about this project?"

Him: "Then the rest of this [worry] is all bullshit. You'll figure it out."

<I might be starting to cry at this moment.>

Went out trail viewing with Aunt Sonnie today. Greenhorn is closed (sorta, kinda, maybe - officially so, but locals hike it and say the washout that has the trail closed for another 12 months is actually passable, and yes, you can be fined $5000 for hiking on the trail anyway, but more likely it'll be a $150 fine, so go on Saturday when the rangers aren't out. At least, that's what the locals say...), so other trails became needed. We drove around for a bit, my looking at my phone to see what trails were coming up along the highway, Sonnie pointing out different houses, different roads, different mountains, different turns. She would tell me about who owned this house, and how they met, who owns that house, and how they met. She would tell me a story about this restaurant, or that lake.

At some point, fortunately quickly, I realized we were doing more than looking for trails for me to hike. She was telling me of important events in her life. She was sharing her nostalgia, her memories. She was gifting me with happy events. She was sharing her knowledge, but in a bigger sense, she was being vulnerable with sharing what she had lost years ago when she moved away a half decade ago.

I put down my phone, stopped tracking where we were, and listened.

At one point, Aunt Sonnie asked if I wanted to take the short cut, a windy, narrow dirt road. I said sure, then laughed mightily when we arrived at the other side and I saw the name of the road. 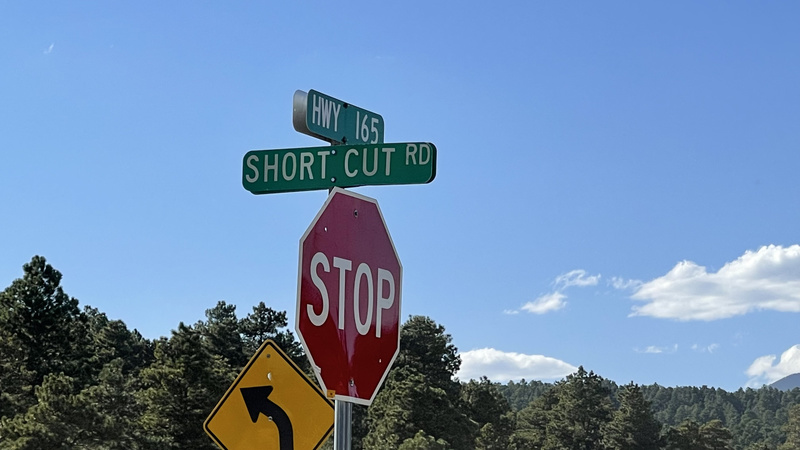 Outside of the Comfort Zone

Oddly, I fell asleep at 20:30 last night, and woke up at 6:30 this morning. I usually don't sleep that much, but last night, I needed that much sleep, so sleep I did. With my late rise from bed, however, I needed to hustle to check out the trails that were literally right outside the back door, before I needed to work. I mean, how many times have I said I want to be close enough to trails such that I could walk out the back door and start climbing up? IDK, lost count.

So, on with the hiking boots and heart rate monitor, and out the door. "Go to the right!" Aunt Sonnie called out as I passed over the electrified fence. Okay then, not the path up, the path across, which seemed odd to me at the time, as I wanted to go up, and was asked to call her when I reached the summit. Sure. Okay. All these trails are unknown to me, have at it. 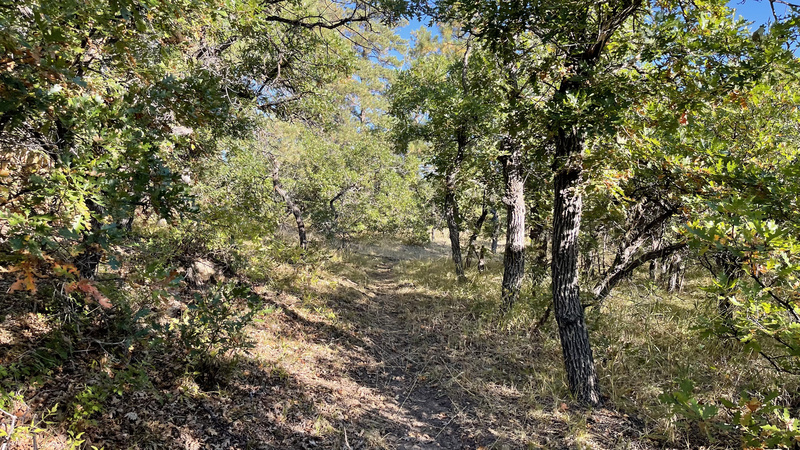 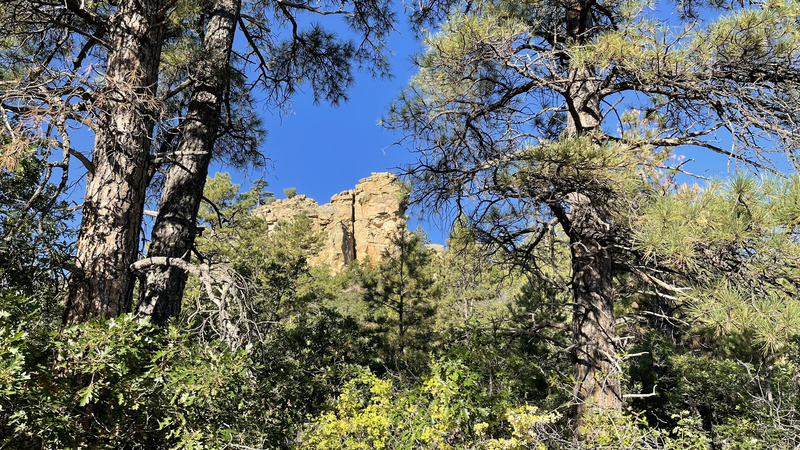 I had originally intended to walk this trail being fully present. My aunt had told me about the bears (big!) and snakes (big!) around here, and cautioned me to be alert for both around here. I had recommended to V----- recently that when he go out for his Thinking Walk™ to stay off the phone, no music, no audiobooks, no podcasts, no pictures, just walk. I wanted to do the same for myself: go out, and just walk and think.

Turns out, when the simple thing is gone and you're getting old and want something to rely on, having a Keane song running loops in your head is not the best way to go for a Thinking Walk.

Wasn't long before I had done no thinking and, yep, lost the trail. 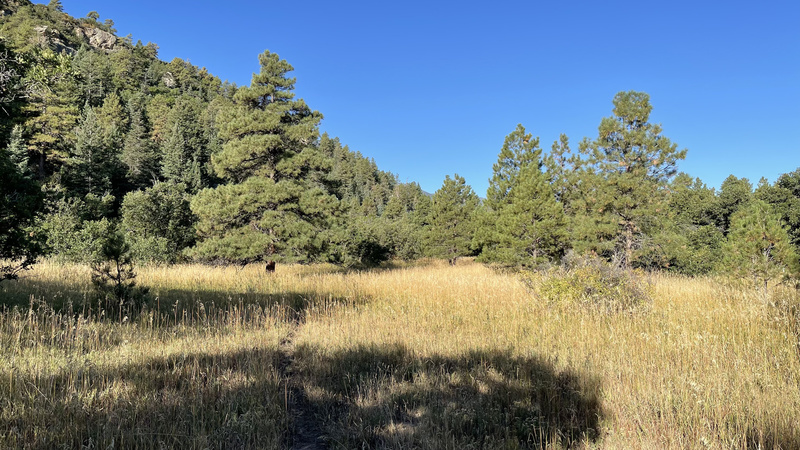 I eventually found the trail again and kept walking along it, feeling increasingly uncomfortable as I did so. This path was going around the mountain I wanted to be going up. The giant piles of poop I kept walking past weren't bear poop, were old, and were very large. I was going for a short walk, so carrying only water: no stick, no knife, no mace, no matches, no tourniquet, no Inreach. No, I wasn't far from civilization, wasn't far from where I had woken up that morning. I was, however, outside of both cell phone range and my comfort zone.

And when I heard movement that was at least human size, and wasn't me because I was standing still, I decided that nope, I was just fine turning back around. To my chagrin, I was gone less than half an hour. 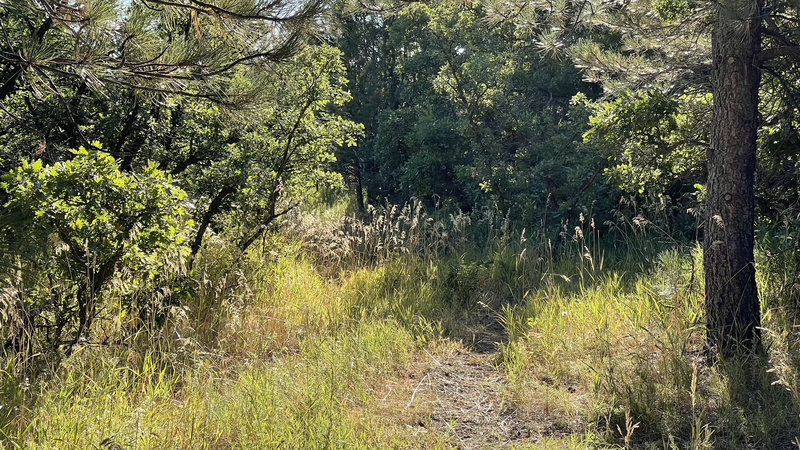 When I returned to my starting point, the trail outside the back yard, well, you know what? There was another trail going up. Maybe I'd be okay with that one.

It went up, and up and up, at an easy grade, nothing difficult, nothing worrisome. It quickly twisted around the rocks I had seen at the top of the hill when I was at bottom of the hill. Okay, this delighted me. 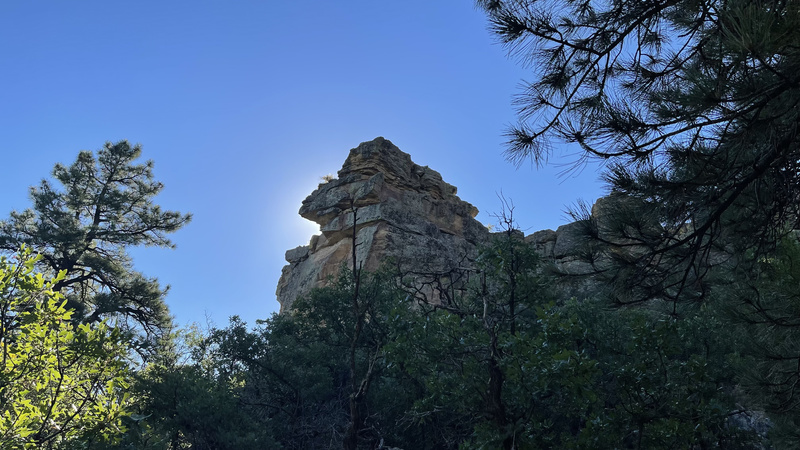 Still being cautious about bears and snakes, I walked along the very obvious path that wandered in a valley between two of the rock walls on this hill. There were trees with enough shade and coolness for me not to be hot in my usual overdressed self. Had I been on this trail many times before, this would have been a lovely hike. Instead, I walked into a pile of bear poop. 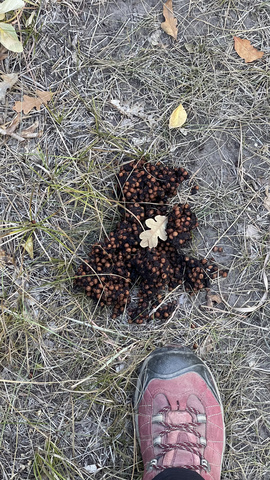 Do I go forward or turn around? I stood undecided, listening for any large sounds. I heard none, still undecided. Hello, edge of my comfort zone, let me walk right through you. I went ahead on the trail for a short bit before I realized, hey, I could actually TOUCH the bear poop, see if it was cool or not. So, I walked back, and poked the poop.

It was not only cold, it was also a bit dry. I was fine. Whoo! Back along the trail I went.

Until five minutes later, I walked into a pile of large animal bones.

Okay, nope. Nope nope nope. I turned around and walked back down the trail, over the electric fence, and into the house. Laughing a bit to myself, I showed my aunt what I had found. She poo-poo'd pretty much everything that had made me nervous. The poop looked old. The bones, pfft, those were from at least last season. The sounds? Likely a deer. Next time, call out hello!

Seriously, I want to be this woman when I grow up. She's amazing.

Tomorrow, I'm walking down the road and back up. That seems a better idea, if more boring.

Diary of a Bookseller 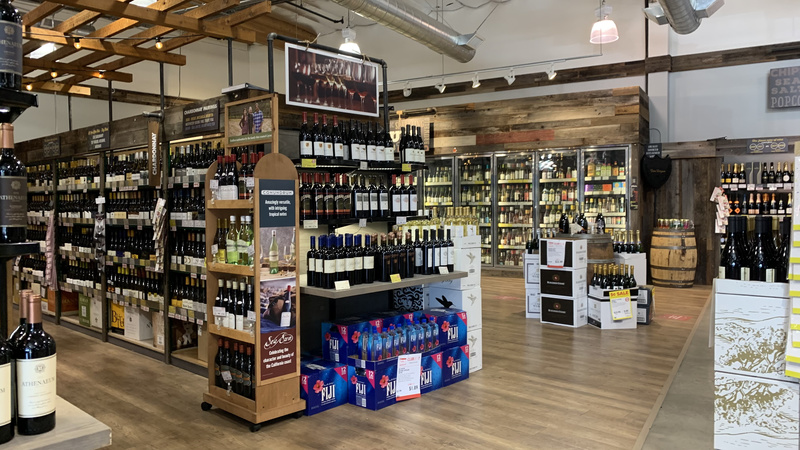 I went to BevMo today to pick up some beer, not for me, and wandered around a short while, looking at all the different bottles, cans, and boxes of alcohol.

I was unexpectedly nostalgic for the experience of drinking, which was weird. I mean, I'm still not drinking. I am still okay not drinking. I am actively choosing not to drink: I am not not-drinking by mandate or health requirement.

So, why the longing for something that wasn't a great experience for me?

Right. I wasn't longing for alcohol, I am grieving for the loss of the experiences that came with the alcohol. The winery tours with Kris and Heather and Andy. The sushi and sakes in Portland with the Oliphants. The exploration of whiskey bars with Jonathan. The quiet evenings with friends, playing bridge or poker or board games. The glass of wine at a large orphan holiday dinner at Keith and Katie's.

All the alcohol at the store reminds me of the of events surrounding past alcohol I've had, and those events are what I'm longing for, not the alcohol itself.

Realizing this is the loss I'm feeling, and that I had and can have more delightful experiences without alcohol, yeah, I'm good.

END_OF_DOCUMENT_TOKEN_TO_BE_REPLACED

Other stuff here. Have a look!

This Doesn't Have to be a Thing
No no no, you don't need that one.
Tea Temps
Chaos Machine™
"Oh, sorry, negative."

Because How Could She Be Competent?
That Phrase's Location is Important
When A Beginner Asks For A Project To Do
Yelp Reviews are Pretty Much Worthless
The Gap of Fifty Years

I have also recently read...

I am also reading...