The Shape of Water« an older post
a newer one »Wanderers
Book Notes Yeah, kitt finished writing this at 20:36 on 29 July 2019 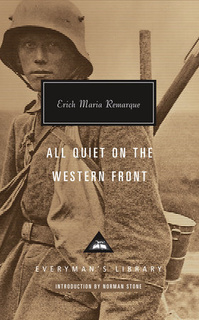 I bought this book a couple years ago at Powells, from the bargin bin. The version was a new translation, from around 1994, and had wordings and phrases that really worked for this "modern reader." As with One Hundred Years of Solitude, it was a book I needed to read. Much past that, I am unsure why I picked it up, or why I read it at this point.

As with One Hundred Years, one should not read the introductions. This book's introduction, "oh look at me, I am so learned about this book and this author, let me discuss the most essential plot point before you have even started the book," (YEARGH!) also gave away too much.

While I know this book is often assigned in high school, I'm completely certain that I understood more having read the book as an adult, than I could have possibly understood as a teenager. The main character is nineteen, twenty, so reading it without life experiences could possibly allow an emotional connection to Paul, the narrator, but not knowing the horrors of war (as most American high schoolers do not), nor having the larger world perspective, nor understanding of the cycles of history, leads me to believe that the book will read as just a story rather than a fictionalized telling of Remarque's WW1 experiences.

There's a part of the book where the main character's company is deployed to the front, and need to walk to the actual front. They are walking single file through a forest when the line is ambushed, and the soldiers scatter. The telling of the scene is so rich that one is taken to the French forest, one can feel the thumping of the artillery on the front, smell the decay of the forest floor, feel the night air and the darkness of a world before plentiful light and never night. The described sounds of the company and the gut reactions to the ping ping of the shots downing the guy in front of the narrator send chills and terror in a visceral way that I believe most people don't experience these days: how can they when they've grown up on first person shooter and infinite light and connectedness?

The book is incredibly powerful. I'd argue that Fives and Twenty Fives is a similar retelling of a different war with a different outcome, with the same shit situation: that the boots on the ground are experiencing the worst, and that none of the rest of us fully understand, or could understand. Those experiences break most, and destroy even those who bend.

Strongly recommend reading this book as an adult. I will buy you a copy, a nice copy even.

On the right-hand edge of the field they have built a huge latrine block, a good solid building with a roof. But that is only for new recruits, who haven't yet learned to get the best they can out of everything. We want something a bit better. And scattered all around are small individual thunderboxes with precisely the same function. They are square, clean, made of solid wood, closed in, and with a really comfortable seat. There are handles on the sides so that they can be carried about.
Page: 24

I can still remember how embarrassed we were at the beginning, when we were recruits in the barracks and had to use the communal latrines. There are no doors, so that twenty men had to sit side by side as if they were on a train. That way they could all be seen at a glance - soliders, of course, have to be under supervision at all times.
Page: 25

Out here in the open air the whole business is a real pleasure. I can't undertand why it was that we always used to skirt round these things so nervously - after all, it is just as natural as eating or drinking. And perhaps it wouldn't need to be mentioned at all if it didn't play such a signifcant part in our lives, and if it hadn't been new to us - the other man had long since got used to it.
Page: 25

For the others, for the older men, the war is an interruption, and they can think beyond the end of it. But we were caught up by the war, and we can't see how things will turn out.
Page: 37

We had an hour of saluting practice this afternoon because Tjaden gave a major a sloppy salute. Kat can't get over this. "Watch out, lads," he says, "we'll lose the war because we are too good at saluting."
Page: 55

For me, the front is as sinister as a whirlpool. Even when you are a long way away from its centre, out in the calm waters, you can still feel its suction pulling you towards it, slowly, inexorably, meeting little resistance.
Page: 68

With the first rumble of shellfire, one part of our being hurls itself back a thousand years. An animal instinct awakens in us, and it directs and protects us. It is not conscious, it is far quicker, far more accurate and far more reliable than conscious thought. You can't explain it.
Page: 69

French rockets shoot up, the ones with silk parachutes that open in the air and let them drift down really slowly. They light up everything as clear as day, and their brightness even reaches across to us, so that we can see our shadows stark against the ground. The lights hang in the sky for minutes at a time before they burn out. New ones shoot up at once, everywhere, and there are still the green, red and blue stars.
Page: 71-72

Searchlights begin to sweep the black sky. They skim across it like huge blackboard pointers, tapering down at the bottom. One of them pauses, shaking a little. At once another is beside it, they cross and there is a black, winged insect trapped and trying to escape: an airman. He wavers, is dazzled, and falls.
Page: 72

He notices his helmet and puts it on his head. Slowly he comes to himself. Then suddenly he blushes scarlet and his face has a look of embarrassment. Cautiously he puts his hand to his rear end and gives me an agonized look. I understand at once: the barrage scared the shit out of him. That wasn't the precise reason that I put his helmet where I did - but all the same I comfort him. 'No shame in that, plenty of soldiers before you have filled their pants when they came under fire for the first time. Go behind that bush, chuck your underpants away, and that's that -"
Page: 75

The screaming goes on and on. It can't be men, they couldn't scream that horribly.

I have never heard a horse scream and I can hardly believe it There is a whole world of pain in that sound, creation itself under torture, a wild and horrifying agony.
Page: 75

"Albert, what would you do if all of a sudden it was peacetime?"

"There's no such thing as peacetime," replies Albert curtly.

"I'd bugger off out of it," grumbles Kropp.

"Course. And then what?"

"Christ almightly," says Haie, and his expression softens, "the first thing I'd do is pick myself some strapping great bint, know what I mean, some big bouncy kitchen wench with plenty to get your hands around, then straight into bed and no messing! Think about it! Proper feather-beds with sprung mattresses. I tell you, lads, I wouldn't put my trousers back on for a week!"

Silence all around. The image is just too fantastic. It sends tremors right across the skin.
Page: 88

All at once everything seems to me to be pointless and desperate.

Kropp takes it further along the same line, "It will be just as difficult for all of us. I wonder whether the people back at home don't worry about it themselves occassionally? Two years of rifle fire and hand-grenades - you can't just take it all off like a pair of socks aftewards - "

Albert puts it into words. "The war has ruined us for everything."

He is right. We're no longer young men. We've lost any desire to conquer the world. We are refugees. We are fleeing from ourslves. From our lives. We were eighteen years old, and we had just begun to love the world and to love being in it, but we had to shoot at it. The first shell to land went straight for our hearts.
Page: 98

We are like children who have been abandoned and we are as experienced as old men, we are coarse, unhappy and superficial - I think that we are lost.
Page: 132

A few years ago we would really have despised ourselves. Now we are pretty well content. You can get used to anything - even being in the trenches.

This habit of getting used to things is the reason that we seem to forget so quickly.
Page: 147

Because one thing has become clear to me: you can cope with all the horror as long as you simply duck thinking about it - but it will kill you if you try to come to terms with it.

We want to go on living at any price, and therefore we can't burden ourselves with emotions that might be all very nice to have in peacetime, but out of place here.
Page: 147

We have never been a very demonstrative family - poor people who have to work hard and cope with problems very rarely are. They can't really understand that sort of thing either, and they don't like contsant going on about things that are perfectly obvious.
Page: 166

War is another cause of death, like cancer or tuberculosis or influenza or dysentery. The fatalities are just much more numerous, and more horrible.
Page: 266

But we are thin and starving. Our food is so bad and full of so much ersatz stuff that it makes us ill. The factory owners in Germany have grown rich, while dysentery racks our guts.
Page: 274

... they [the stories] are honest, and they call a spade a spade, because there really is a lot of fraud, injustice and petty nastiness in the army.
Page: 276

Leer groans and props himself on his arms, but he bleeds to death very quickly and no one can help him. After a few minutes he sinks down like a rubber tyre when the air escapes. What use is it to him now that he was so good at mathematics at school?
Page: 278