Unthinkable« an older post
a newer one »The Volunteer
Book Notes kitt decided around 09:52 on 14 August 2019 to publish this: 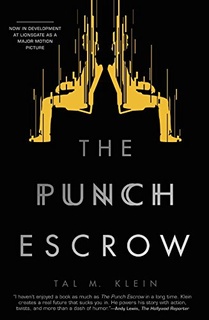 Okay, this review is going to be one giant spoiler. If you have not read the book, and plan on reading the book, don't read on.

Okay then, years ago, likely a couple decades at this point, I read a science-fiction short story about teleportation. An alien race arrived at Earth with this nifty teleportation technology, and is willing to give us this technology, interface with us, grant us the use of this amazing technology, but they will still control it and maintain it. I vaguely recall the aliens looked like dinosaurs or reptiles, and the teleportation unit had some human that operated it. Both of these recollections may be wrong, but they might be accurate, unsure.

Anyway, the teleportation worked by duplicating the object being teleported. The object (yes, including a human) would exist in the origination and the destination points at the same time. When the copy was deemed complete, the original would be destroyed. This was one of the rules the aliens laid down: that only one copy can exist, the other must be destroyed. Breaking this rule meant the technology would be revoked, and humans would lose it. This loss would include losing the ease of visiting stars, losing instant (near instant, go with it) transportation, losing access to untold riches and cultures and other technology.

Humans were not willing to lose this technology.

From an individual being teleported's perspective, you go to sleep and wake up at the destination. WOW how amazing!

In the short story, there's a glitch, and the transportee wakes up. She's confused. She's in the original place, the operators aren't sure the process worked, and there are tortuous hours while they figure out if she was teleported, are there two of her?

Turns out, there ARE two of her, and the local copy needs to die. She's led to the airlock, all the while begging to live, thrown into it, and is spaced. The human operator who does this killing knows the consequences of not doing it, and actively kills the woman of the story.

Phew. That's the short story I read years ago.

So, when I started reading this book, I"m all of 20 pages into it when we learn about the teleportation in the book. And I think, "Fuck, this is going to be a duplication of that story, isn't it?"

Which ruined the whole book for me. Because this was a longer version of that short story.

Which is to say, if you haven't read either this review nor that short story, this is a fun beach read. If you have read either, skip it.

Sorry to ruin the book for you if you were going to read it and didn't stop when I told you to stop.

Because of the Entscheidungsproblem, computers couldn’t make an original decision. Every choice they came to could only be based on data and algorithms that had been preprogrammed into them. That’s not to say computers couldn’t get new ideas, but every new idea they got could only come from remixing old ideas, or external input from other computers, or through human input.
Page 21

So yeah, things weren’t great between me and my wife, but we were doing our best. Well, technically, she did her best, and I trailed along behind, living off the scraps of her drive and success like a remora.
Page 39

Sylvia had always given everything 110 percent, whether it was our relationship, her job, or even planning vacations. She was the one who did the research, built itineraries, then told me when and where to show up. She was also the breadwinner, which I guess made me the bread loser. Some spouses might have been irked by that, but not me. I was content to take it easy.
Page 39

Shit always goes wrong when Sylvia and I go on vacation. We’ve always referred to these mishaps as adventures, because we don’t want to call them vacation fuckups. Besides, who wants to have a textbook holiday anyway? Half the fun is partaking in some ridiculous misadventure that you can later tell your friends over drinks.
Page 48

"We will save your souls; We will fulfill your pact with the Creator, your obligation to live one life and die one death."
Page 55

Corina was obviously prepared for the question. “Joel, this is new territory for me, and for all of us here at International Transport."
Page 88

Okay, so, this is entirely BS. The company HAD to have considered this possibility. Is impossible NOT to have thought of it.

“Why are you doing this for me?”

“It is my belief that, given the circumstances, anyone might have done what you did."
Page 105

Wow, leading with compassion? Now we KNOW this is a work of fiction.

But really, leaders and followers recognizing that perfect people do not exist, what a world that would be, eh?

*cough* Mistakes were made.

It’s the centerpiece of our new world order. Unelected, undemocratic—you in the West no longer have the power to vote with your money, despite what they tell you. But I suspect you already know this, Yoel: that they control your lives through commerce, and that it is fine. Maybe even you believe it is better this way.
Page 110

Well... the best fiction has truth in it, eh?

'You could even jailbreak your printer, buy a Big Mac, and then replicate it for your friends—but it wouldn’t be the same—the copy wouldn’t be “signed” by McDonald’s. We humans place a lot of stock in originality—our culture has always focused on “the real thing” having true tangible value, and with molecular signatures, it has become nearly impossible to make illegitimate replications of anything patented.'
Page 119

Laughing at this one. No, our culture does not focus on "the real thing." Look at diamonds, we're JUST FINE having cheaper man-made ones than nature made ones. We just want EVERY ELSE to think we have the real thing.

I’m guessing if you asked anyone from IT about the moral implications, they would likely extol humanity’s well-documented historical grapples with new transportation technologies. When railroads were first introduced, some people thought the speed would be so intense, it would cause their organs to shoot out of their rectums. But folks still got on board.
Page 124

Today you are rewarded for asking your questions, they call you a salter, and they pay you chits. But he, in his time, he was punished, and they took his name away, and exiled him.” A brief snigger. “It’s funny how the devout pretend like they want people to ask questions, but really they only want you to ask the questions that they have answers to.
Page 162

“Bullshit this, bullshit that. You keep on using that word like it means something other than what comes out of a cow. It’s not bullshit, Yoel. It’s life.”
Page 168

“Come on!” I called up to him, really laying on the disbelief. “What could you possibly do that can’t be undone by someone else?”
Page 315